Book in the Spotlight: The Winter Duke 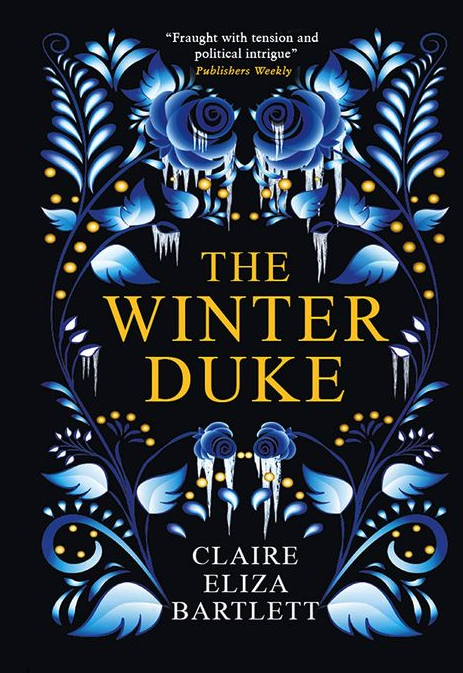 It’s the night before her brother, heir to the icy throne of Kylma Above, is due to choose his bride and Ekata Avenko is counting the hours until she can leave her cruel parents and murderous siblings behind for a new life at university. Politics and power struggles bore her; sixteen-year-old Ekata just wants to study science, and maybe to get a peek underneath the frozen lake that separates her world from the underwater Kylma Below.

But when her entire family is struck down by a mysterious illness the night before the brideshow, Ekata is the only Avenko left to take on the title of duke. Faced with a responsibility she never wanted, she must fight to protect her family’s throne and to survive a castle full of staff who want her gone. Thankfully she has the support of her new wife and consort, warrior princess Inkar who came to Kylma above to marry Ekata’s brother. But can she trust her? Can she trust anyone?

This YA fantasy is a sumptuous slow burn full of sparkling prose, strong women and world building to make you shiver. I’m a sucker for stories set on the snow and I absolutely fell in love with Bartlett’s language and talk of twinkling spires, frozen roses and ice crystals spun from magic as it skips through the cold water. At times the book moves along at a glacial pace – no pun intended – so if you’re a fan of fast plots and edge-of-your-seat suspense, The Winter Duke probably won’t do it for you. In fact, I highlighted so many passages on my Kindle thanks to Bartlett’s gorgeous settings and evocative descriptions (dark cities beneath the ice! Shimmering magic harvested from pearls!) that it took me longer to get through than it should have. But if you love tales of royal intrigue, cutting betrayal and the sort of sulky monarch you can only find in YA, get your hands on this book now. It’s also worth noting how deftly Bartlett writes a non-binary character without ever referencing their gender identity, proving that it’s really not as difficult for us readers to get our heads around they/them pronouns as some people think.

If I had my way, I’d have loved a little deeper characterisation; Ekata’s an interesting protagonist but the supporting cast aren’t given much room to shine, particularly her bride, Inkar, who I really warmed to and would have liked to spend more time with. I’d also have loved more focus on the magic system in Kylma Above and Below as it’s a fascinating premise that’s maybe not explored to its full potential, given how central it is to the nation’s power balance.

That said, The Winter Duke really is a beautifully written story with a truly bewitching setting and some unique ideas, not to mention a stunning cover if you can get your hands on the illustrated UK version.