Book in the Spotlight: All the Tides of Fate 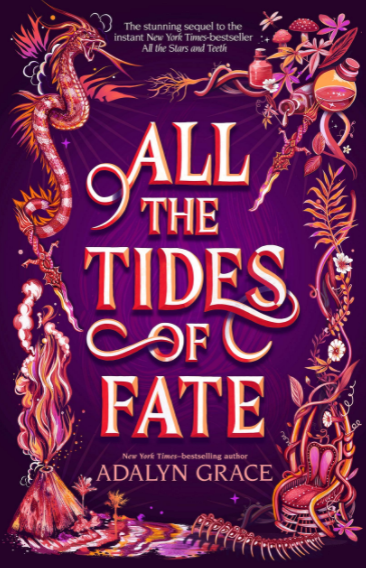 In this sequel to All the Stars and Teeth, Amora is reeling from the discovery that everything she thought she knew about soul magic and her family’s role in the history of Visidia was a lie. She has spent her life with blood on her hands for nothing, and her people can’t find out. But now, in the wake of her father’s murder, she must take the throne as Visidia’s queen and lead her kingdom into a new dawn. But everyone is questioning her ability to rule and who can blame them? She may have vanquished Kaven, but it was at the cost of her own magic. Now she has nothing but her sword to protect her citizens and, even worse, a powerful curse has split her soul in two, tying her to the one person she needs space from.

With the future of Visidia hanging in the balance, Amora must climb aboard Keel Haul once again and journey into the unknown on a quest to break the curse of her bloodline and restore her magic before anybody discovers it’s gone.

The second instalment in Adalyn Grace’s duology has all the romance, dark magic and high seas adventure of the first book, but now Amora’s choices matter more than ever as the fate of her kingdom rests on solely on her shoulders. Fans of All the Stars and Teeth will be glad to see the dangerously beguiling mermaid Vataea back on the crew alongside the men in Amora’s life: Ferrick, newly engaged Casem and, of course, Bastian. Secondary characters are developed further in this story, and the return of steely yet hilarious Shanty not only lends a bit of glamour (literally) to the crew but also a new perspective and background on Bastian, who was friends with Shanty in his former life.

The romance between Amora and irresistible pirate Bastian in the last book was electric: their connection was palpable from the first page and several steamy scenes later the pair seemed a match made in heaven despite not yet taking their relationship all the way. But All the Tides of Fate sees Amora reluctant to let Bastian too close, flinching when he touches her and scoffing when he confesses his love. As well as being incredibly frustrating for the reader after such a big build-up in the first instalment, this reaction feels a little strange. Amora is scared that the curse connecting their souls means she can’t trust her feelings for Bastian, worried she may mistake her dependency on him for true love, and that’s understandable. But before the showdown with Kaven that ended in their cursed bond, Amora had very clear, strong feelings for Bastian and there was no denying their chemistry. It seems overly cautious of her to distance herself from him now.

Despite this frustration, the sequel delivers on everything readers loved about the first book and more. We get to explore more of this fascinating, magical kingdom and witness how Visidia is changing in the wake of Amora’s discovery that people can, in fact, practise more than one type of magic without tragedy. Amora’s grief for her father is beautifully handled and adds realism to the story where so many authors would have skimmed over the topic.

This is a perfect book for fans of swashbuckling YA fantasy who like their dark, magical adventures served with a healthy dose of beautiful costumes, exotic locations and pure, unadulterated lust.

All stories by: Siobhan O'Brien Holmes
Story prompt: lesser known monsters
How music can improve your writing and deepen your children’s story

Chrissy Sturt | Advanced report
‘Several pennies have actually dropped’
I’ve had a look through everything and wanted to thank you so much for the forensic view of my novel. It’s the first time I’ve had a developmental edit like this completed and it has been, in turn, horrifying, enlightening, surprising and confidence boosting! But I guess you’ve probably seen that before. In many respects, several pennies have actually dropped and I have a firmer idea of what I need to do and will work on more research and reading.
Maria White | MG fantasy dev edit

Akin Jabar | MG sci-fi critique
‘So thorough and rich with insight’
What a treat! This is exactly what I needed. Your critique seems so thorough and rich with insight. I will be sure to send you questions if I’m unsure about anything you meant but I think you’re so thorough that I will be able to digest almost everything on my own just fine. It was an absolute pleasure to work with you as well!
Chanya Sainvilus | YA sci-fi critique