Book in the Spotlight: Diana and the Island of No Return 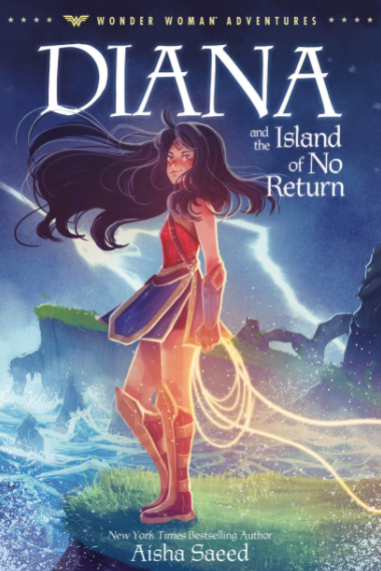 Aisha Saeed’s Diana and the Island of No Return is the first in a new Wonder Woman trilogy aimed at middle-grade readers, and it kicks off the series with a bang. Saeed explores Wonder Woman’s origins as 12-year-old Princess Diana of Themyscira watches the Amazon women of her island train for battle, dreaming of the day when her mother might let her become a warrior, too. But today there’s a distraction: it’s Chara, the annual festival that brings the most powerful, talented and intelligent women from all over the world to Themyscira as they celebrate their cultures together.

Diana can’t wait to join in. But her world changes forever that afternoon when she finds something on the shore she’s never seen before: a boy. With him comes news that Diana’s life is in danger from a powerful demon, along with everything she and her island hold dear. With all the Amazon women under a sleep spell, it falls to Diana to go into battle and fight for her home and her people. If only she’d actually trainedto fight or knew what this demon wanted with her.

This is a really fun, fast-paced read full of magic and adventure. It will particularly appeal to fans of the DC universe, but there’s no prior Wonder Woman knowledge needed; even the uninitiated can get on board with the exciting action plot, well-developed characters and themes of friendship and inner strength. Readers craving a bit more girl power in their superhero stories will rejoice: Diana is a seriously kick-ass young female protagonist with bags of self-assurance, loyalty and kindness in equal measure, and her best friend Sakina is always up for a challenge, too. If you’ve ever seen a Wonder Woman movie or read the comics, you’ll have no trouble imagining the action in store. Together (and with the help of chariot maker to the gods, Augustus), Diana and Sakina scale unscalable cliffs, lasso demons and overcome an army of hypnotised locals with power angle kicks.

The main trio of characters is really well written, and there’s lots of warmth between them, and the villain of the piece is deliciously menacing and dripping with contempt yet somehow suave and charming at the same time – think Scar in The Lion King or Alan Rickman in, well, anything. This cast never feels flimsy or one dimensional – even the animal sidekicks have personality and purpose – which adds to the realism of the fantasy world Saeed has built.

Diana and the Island of No Return is a fantastic entry into the Wonder Woman canon, and it’s refreshing to see prose rather than a graphic novel for a change. The story will particularly appeal to female readers thanks to the tough protagonist and no-boys-allowed Amazon warrior island she hails from, but the fun, speedy plot offers something for all action lovers, perhaps even reluctant readers, too: Wonder Woman’s ubiquity and recognisable look may offer an accessible way into the story for children already familiar with this DC superheroine from films or comics, even if they’re a little apprehensive of reading, and anything that encourages children to pick up a book gets a huge gold star from me.

All stories by: Siobhan O'Brien Holmes
10 articles for MG and YA genre authors to read this month: May
A Monday in the life of a kidlit editor, writer & reader #1

Aisling White | YA fantasy dev edit
‘Several pennies have actually dropped’
I’ve had a look through everything and wanted to thank you so much for the forensic view of my novel. It’s the first time I’ve had a developmental edit like this completed and it has been, in turn, horrifying, enlightening, surprising and confidence boosting! But I guess you’ve probably seen that before. In many respects, several pennies have actually dropped and I have a firmer idea of what I need to do and will work on more research and reading.
Maria White | MG fantasy dev edit
‘I’m really impressed with your critical eye’
Wow, an excellent middle grade manuscript critique! I’m really impressed with your critical eye and what you’ve picked up on here – your comments are very astute and your feedback has been very valuable, as always. I agree with almost everything! Thanks a lot for this – I can’t wait to send you another.
John Lomas-Bullivant | MG fantasy critique

Sara Cassidy | Children's adventure critique
‘So thorough and rich with insight’
What a treat! This is exactly what I needed. Your critique seems so thorough and rich with insight. I will be sure to send you questions if I’m unsure about anything you meant but I think you’re so thorough that I will be able to digest almost everything on my own just fine. It was an absolute pleasure to work with you as well!
Chanya Sainvilus | YA sci-fi critique